One would intuitively assume that if one was given 100 data points of data, it would be most accurate to interpolate the 100 data points to a 99th order polynomial. More the merrier: is that not the motto. But I am sorry to burst your bubble – high order interpolation is generally a bad idea.

The classic example (dating as back as 1901 before there were calculators) to show that higher order interpolation idea is a bad idea comes from the famous German mathematician Carl Runge. 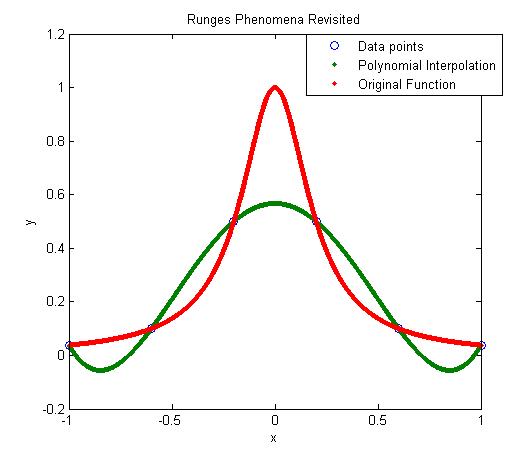 Maybe I am not taking enough data points. Six points may be too small a number to approximate the function. Ok! Let’s get crazy. How about 20 points? That will give us a 19th order polynomial. I will choose 20 points equidistantly in [-1,1]. 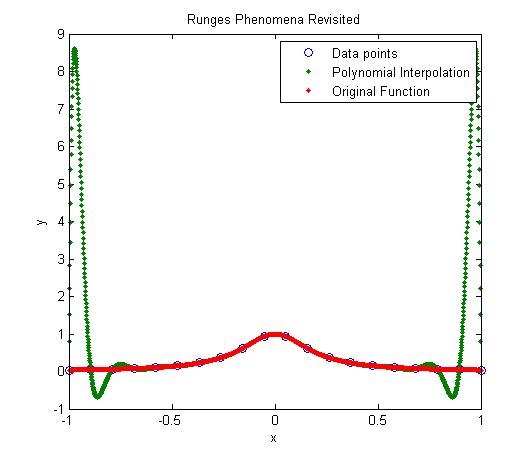 Given n+1 (x,y) data pairs, with all x values being unique, then a polynomial of order n or less passes thru the (n+1) data points. How can we prove that this polynomial is unique?

I am going to show you the proof for a particular case and you can extend it to polynomials of any order n.

Then if a polynomial P(x) of order 2 or less passes thru the three data points, we want to show that P(x) is unique.

We will prove this by contradiction.

But how do you know that a second order polynomial with three zeros is identically zero.

That is in fact the case as

In a previous post, we talked about why LU Decomposition is computationally more efficient than Gaussian Elimination in some cases. The argument was based on how much computational time does each of the methods take. For example, we said that for back substitution in both methods, the computational time is approximately proportional to $latex n^2/2$.

How did we find that for back substitution the computational time is approximately proportional to $latex n^2/2$? 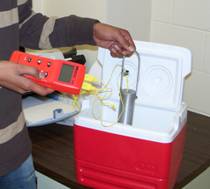 Starting Summer 2007, five experiments have been introduced in the course in Numerical Methods at USF. I will discuss each experiment in a separate blog as the

The first experiment illustrates use of numerical differentiation, numerical integration, regression and ordinary differential equations. In this experiment, an aluminum cylinder is immersed in a bath of iced water. As you can see in the figure, two thermocouples are attached to the cylinder and are connected to a temperature indicator. Readings of temperature as a function of time are taken in intervals of 5 seconds for a total of 40 seconds. The temperature of the iced-water bath is also noted.

If you just want the data for a typical experiment conducted in class, click here and here for data.

The students are now assigned about 10 problems to do. These include

Eight years ago, the Florida legislature decided to reduce the number of credit hours it takes a state university student to graduate with an undergrad engineering degree. The number of credit hours were reduced from 136 to 128. One of the courses that got the ax in the Mechanical Engineering Department at USF was a 2-credit hour Linear Algebra course. There are many other universities in the nation that have done the same.

So how do students learn Linear Algebra when the course is one of the requirements for accreditation of engineering programs?

Some universities have bundled Linear Algebra course content into courses such as Quantitative Methods where students are expected, in many cases, to learn linear algebra, a programming language/computational system, and complex analysis. Other curriculums have dispersed the Linear Algebra content into different courses such as the topic of special matrices in Programming, simultaneous linear equations in Statics, and eigenvalues/eigenvectors in Vibrations, etc. Unless quality controls are introduced carefully, the content/depth of Linear Algbera in such courses can vary substantially between courses and instructors. Such control is impossible in metropolitan universities such as USF where a large proportion of students transfer from community colleges.

To have a resource that would be a self-explanatory as well as get the students exposed to Linear Algebra applications motivated me to write a simple Introduction to Matrix Algebra book. The book consists of ten chapters spanning fundamentals of matrix algebra, numerical methods for solving a set of equations, and a treatment of adequacy of solutions and eigenvalues.

Since 2002, the Introduction to Matrix Algebra book has been downloaded free of charge by more than 30,000 users from 50 different countries, and the feedback has been humbling and fulfilling.

Since April 2008, the book has also been made available for a nominal charge via lulu.com as a pdf file as well as a soft cover book. Proceeds from the book are allowing me to expand the book with more examples/problems and additional chapters.

For more details about the book, visit the book website at http://autarkaw.com/books/matrixalgebra/index.html

So why use and waste time talking about LU Decomposition?

Because, LU Decomposition is computationally more efficient than Gaussian elimination when we are solving several sets of equations with the same coefficient matrix but different right hand sides. Case in point is when you are finding the inverse of a matrix [A]. If one is trying to find the inverse of nxn matrix, then it implies that one needs to solve n sets of simultaneous linear equations of [A][X]=[C] form with the n right hand sides [C] being the n columns of the nxn identity matrix, while the coefficient matrix [A] stays the same.

The computational time taken for solving a single set of n simultaneous linear equations is as follows:

So for LU decomposition method used to find the inverse of a matrix, the computational time is proportional to \frac{n^3}{3}+n( \frac{n^2}{2}+\frac{n^2}{2})=\frac{4n^3}{3}. Remember that the forward elimination only needs to be done only once on [A] to generate the L and U matrices for the LU decomposition method. However the forward and back substitution need to be done n times.

Now for Gaussian Elimination used to find the inverse of a matrix, the computational time is proportional to n \frac{n^3}{3} +n \frac{n^2}{2}=\frac{n^4}{3}+\frac{n^3}{2}. Remember that both the forward elimination and back substitution need to be done n times.

Twenty-eight Americans were killed on February 25, 1991 when an Iraqi Scud hit the Army barracks in Dhahran, Saudi Arabia. The Patriot defense system had failed to track and intercept the Scud. What was the cause for this failure?

The Patriot defense system consists of an electronic detection device called the range gate. It calculates the area in the air space where it should look for the target such as a Scud. To find out where the Patriot missile should be next, it calculates its location based on the velocity of the Scud and the last time the radar detected the Scud.

The shift calculated in the range gate due to the error of 0.342 seconds was calculated as 687m. For the Patriot missile defense system, the target is considered out of range if the shift is more than than 137m. The shift of larger than 137m resulted in the Scud not being targeted and hence killing 28 Americans in the barracks of Saudi Arabia.

When I started looking at the Google search results of the problem, I found some very useful resources that would be of interest to the reader. These go beyond the above given simplistic explanation of the problem and tell the story behind the story. Here they are

Round off error is the error caused by approximate representation of numbers.

So what then is truncation error?

Truncation error is error caused by truncating a mathematical procedure.

Examples of truncation error abound and include

For more details, read the textbook chapter on Sources of Error in Numerical Methods at http://nm.mathforcollege.com

I am starting this blog to help UNDERGRADUATES with their queries on Numerical Methods for Engineers. I have been teaching Numerical Methods for the last 20 years and I get interesting queries and questions while I am teaching, when students come to see me during my office hours, or the email sent at midnight before the assignment is due.

I am keeping a log of what students ask me and will note the answers to their queries here. I am sure that students elsewhere have similar questions when they take a course in Numerical Methods.

The diversity of the course is quite evident –

With funding from NSF since 2002, we have developed web-based resources for a course in Numerical Methods. The inclusion of the blog is not part of the funded proposals but we think that this mode of Web 2.0 dissemination is critical in keeping the conversation going on. Although what I am doing here can be offered via a static website, the widgets offered by blogging softwares are indispensable. The widgets I like are categorizing, tagging and RSS Feeds.

We want to reach as many people as possible and build a community which may be temporary to students who are taking a course in Numerical Methods, permanent to instructors and people who use numerical methods in their work. But one thing is certain, temporary or permanent, visitors will leave their imprint on this resource.